The Unseen is a new project aimed at investigating and showcasing the research and production of knowledge that is inherent in every artist’s work. That creative core that remains hidden, underground, and that is yet vital, essential for the final artistic outcome.
Focusing on artistic research as the keystone of making art, The Unseen follows every artist involved in exploring his/her creative breeding ground, made of books, pictures, personal objects, and documents the process.
Each event comprises a sort of confession in which the artist does away with the rigid system of the conventional presentation of his/her work.

Born in 2017 and now at its second edition, “The Unseen” investigates and exposes the research and production of knowledge that is inherent in every artist’s work. The creative core that remains hidden, underground, and that is yet vital, essential for the final artistic outcome.

Focusing on artistic research as the foundation of art making, The Unseen follows every artist involved in exploring his/her creative breeding ground – made of books, pictures, personal objects – activating a space for experimenting with unpredictable situations, methods, questions, attempts.

The 2020 edition is open to the collaboration with Oggetti Specifici, the project-gallery founded in 2019 by Caterina Filippini with the analogous intent of investigating and sharing with a public the objects that belong, day by day, to the generative phase of artworks. Diogene has been engaging  with Oggetti Specifici in a long term dialogue, to question the value and preparation of artworks, considering not only the objects involved but also all the life stimuli – such as the occurring of chance, visions, experiences – which contribute to shape the finished work and yet rarely take a material form.

In order to deepen the exploration on the relationship between process and product, material and immaterial traces, the 2020 edition presents a selection of artists that focus their research on live action and performance – whose finished work is not bound to any specific material form. What is the role of objects in their creative process? Is it a different role from the one at play in the work of artists that create material art pieces? How can one share with a public the set of material and immaterial traces that lead to a finished artwork?

During the spring and summer of 2020, the members of Diogene and the founder of Oggetti Specifici have been engaging in a series of dialogues at a distance with the artists invited for the new edition of the project The Unseen: an open discussion among colleagues, complemented by the peculiar approach of Oggetti Specifici, about genealogies and geographies, early passions and education, different approaches to artistic research and production, personal visions about the role of chance, mistake and failure, kinship and distance, responsibility, disillusion and a lot more. 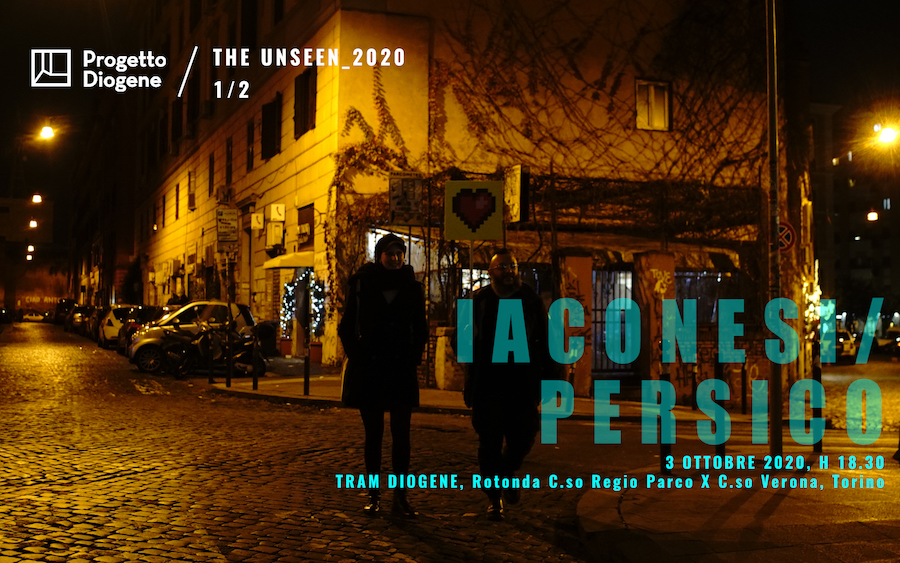 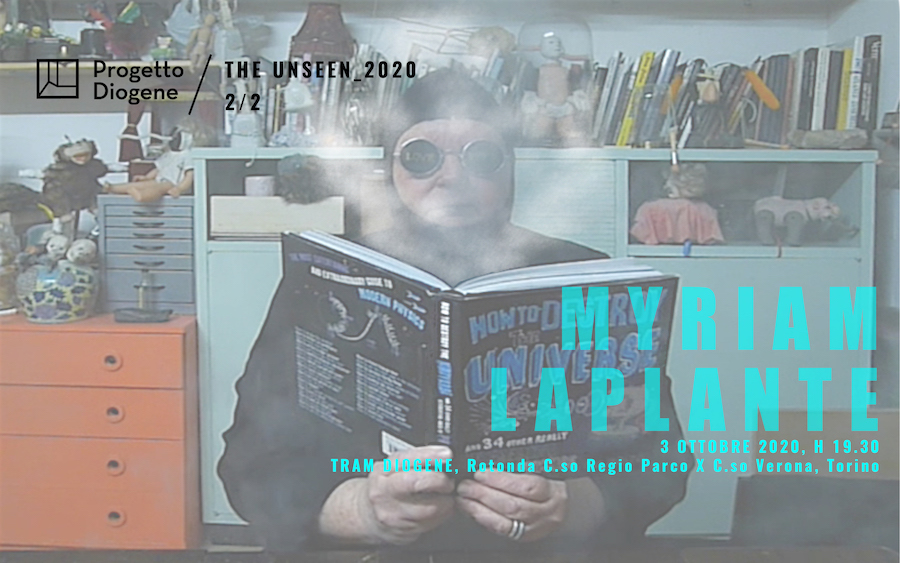 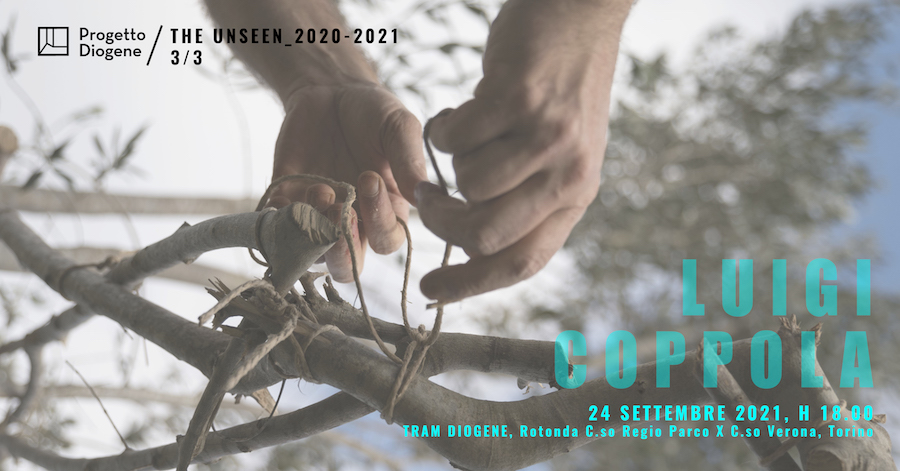 The Unseen 2017 is a project resulting from a collaboration started in 2016 between Progetto Diogene and a group of Turin-based artists (Alice Benessia, Michela De Petris, Giulia Gallo, Silvia Margaria, Enrico Partengo, Elena Tortia, and Arianna Uda), who were involved in past events organised by the association. These artists were invited to each work autonomously on a new project to present at the Tram as part of Progetto Diogene’s 2017 programme.

For the 2017 edition the invited artists are: Py & Verde, Pierluigi Fresia, Cyrilla Mozenter.

The first artists invited to introduce themselves to the audience in this way are the members of the Franco-Italian duo Py & Verde (Géreldine Py and Roberto Verde).

Arranging the circumstances, working through the meaning as well as the forms of thought, organising an unlikely order of unstable, intermittent, unforeseeable events.

They are short-lived attempts at anarchy, Precarious domestic solutions, Entropic adventures, and so forth. Working in an empirical way, with love. Working with things, the time to keep them together, by complementarity. The whole is bigger than the total sum of the parts. Mice too can yawn. Py & Verde, 2009 – 2017

Géraldine Py  (1986, Belfort, France) and Roberto Verde (1981, Jesi, Italy) first met at the Academy of Fine Arts in Marseilles in Anita Molinero’s studio in 2008, and began working together. They work and live in Brussels. They have taken part in many solo and collective exhibitions; Friche Belle de Mai (Marseilles), Mains d’Oeuvres (Paris), Argos (Brussels), Le Fresnoy (Turcoing), Villa Arson (Nice), Pav (Turin), Le Quartier (Quimper), Centre Pompidou and La Nuit Blanche 2016 avec le Palais de Tokyo (Paris).  Currently they are shooting a movie for Lafayette Anticipations, which will feature in a performance next autumn. At the same time, they will present two new works at City Art Gallery (Ljubliana) and a radio project in collaboration with Euphonia (Marseilles).

The second artist who has been invited to display his work in this form is Pierluigi Fresia.

A thought that is yet to see the light, be manifested, will be immense; hence immensity can be attained only before venturing into the future, into the temporal beyond. The ultimate (true?) reality will always be one step ahead of us, biologically bound to that dimension that is time, unfailingly committed to betraying and leaving us behind. (Pierluigi Fresia 2017)

After receiving his education, Pierluigi Fresia (Asti, 1962) started his artistic career in painting, a medium that in the following years he would often use alongside photography and the written word. The works by Pierluigi Fresia have been showcased in many fairs and festivals of contemporary art and photography (ARTISSIMA, Fiera Di Bologna, ArteVerona, MIART, MIA, Arco Madrid, Daegu Photo Biennale, Fotografia Europea Reggio Emilia 2010, 2015), in several collective and solo exhibitions at both public institutions and private galleries. They feature in many private collections, foundations and museums of contemporary art, including MART in Rovereto and GAM in Turin.

The third artist who has been invited to display his work in this form is Cyrilla Mozenter.

“I have approached the theme of process in art making with a retrospective view. I wanted to find what remains consistent throughout my 50 years of making work through a succession of bodies of work, materials, techniques, seemingly different approaches—and results. I have also looked back at my own art education, art historical movements, and artists of the past whose processes have influenced my own. It has been a search for meaning and essentiality. I will present a range of objects as evidence of my process through different bodies of work. I will also show images and discuss examples of work I have made in drawing, installation, books, sculpture, and wall work with such materials as charcoal, paper, soap, fruit pits, thread, cardboard, beeswax, wooden ice cream spoons, industrial wool felt, and language in various forms. I have also attempted to find relationships between these essential processes and basic definitions of art. How do we understand the job of being an artist? I will be presenting my research”. (Cyrilla Mozenter)

Cyrilla Mozenter is a New York artist working in drawing and sculpture. Her primary materials are industrial wool felt and paper. Her work makes frequent reference to the writings of Gertrude Stein, with whom she feels to be in collaboration. Solo exhibitions include the failed utopian at Lesley Heller Workspace (NY), warm snow: Sculpture in Two and Three-Dimensions at Garrison Art Center (Garrison, NY), warm snow at Adam Baumgold Gallery (NY), More saints seen at The Aldrich Contemporary Art Museum (Ridgefield, CT), Cuts and Occasions at Dieu Donné Papermill (NY), Very well saint at The Drawing Center (NY), Undercurrent at Espaço Cultural Municipal Sérgio Porto (Rio de Janeiro), and Secret Ears at BAM (Brooklyn). She has received two fellowships from NYFA and two project grants from The Fifth Floor Foundation. Her work is in numerous public collections including the BrooklynMuseum and the Yale University Art Gallery. She taught in the MFA program at Pratt Institute.